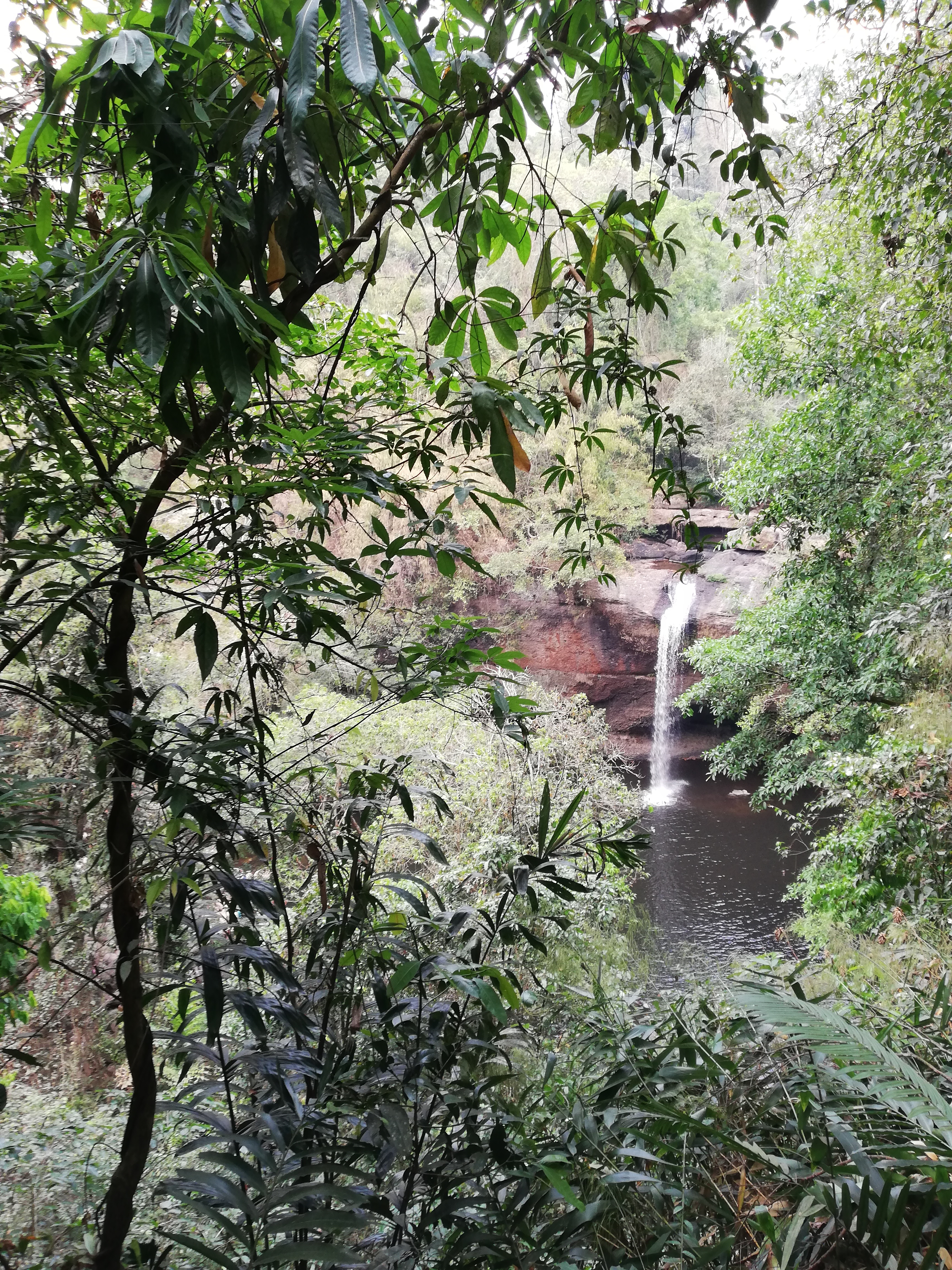 Today we visited Thailand’s third largest National Park: Khao Yai. An oasis of jungles, mountains, lakes and caves spreading over an area of 2600km squared. Each kilometre of that enriched with a diverse population of organisms. Whichever direction you chose to turn your head there would be a pig-tailed macaque grooming, or a pileated gibbons swinging from branch to branch in the dense canopy of a ceiling above your head. A background orchestra of crickets, frogs, birds and primates serenade you as you feel through this natural amusement ride of awe, wonder and disbelief towards the marvellous spectacle which surrounds you.

We started the day in the back of a pick up truck, climbing the small mountain leading up to the entrance to the park. Already the views were spectacular – cascading valleys emerged as we weaved on winding roads, one misjudgement would send you tumbling down the sheer cliff edge to your left which squeezed you tight into the mountainside, clinging on to every last inch of grip. Just after we had entered the park gates, we stopped the trucks to observe a giant black squirrel, 80cm in length, feeding on a branch many metres above our heads. Out of nowhere sprung a Lars gibbon, using it’s incredible upper body strength to pull itself through the trees, clinging to every branch with a faultless delicacy.

We continued on through the jungle. Each mile of road seemed to get darker as the overhead growth thickened, surrounding the truck with a tunnel of green, squeezing tighter and tighter until the vines were raking our heads then suddenly, it ceased. A colossal plain had opened up in front of us, grasslands of green and yellow pushing back the forests. Crested serpent eagles and Great hornbills soar above, searching for prey among the parched blades of grass.

Eventually, we stopped and began our Trek into the jungle. After a tedious ten minutes of struggling against roots, vines and low branches we found a tree, speckled with small rakes and pockmarks. A hungry Asian black bear had been here three days earlier, trying to grab at the honey stored in a bees nest partway up the tree. Progressing onwards, we soon stumbled upon a Pleated gibbon family of four, a good sixty metres above our heads. The gibbons appeared to be hiding, grouping together with the juveniles on the inside. We soon discovered why, as another two gibbons lurched into view, squealing and screeching with teeth bared, neither backing down from the other. A few minutes passed before the confrontation subsided and once again we pushed on, following the call of a juvenile eagle we could hear some 50 metres ahead of us. Another tree loomed into view imminently, this one however appeared to be bleeding. A clear, sparkling discharge was flowing down the trunk like a silver veil, shimmering in the reflection of what little light penetrated through the leaves. As we approached the substances we realised it was extremely thick, and sticky, almost like a transparent treacle. Our guide then informed us that we had found the tallest species of tree in the park, which climbs up to 70 metres in height. The glistening substance itself was in fact a poisonous resin which has been used for centuries in traditional thai poaching methods.

Our jungle trek concluded with a waterfall featured in the Hollywood movie “the beach”, in a scene where the protagonist (Leonardo DiCaprio) jumps from the top and plummets towards the beach below, giving the film its title. The excitement did not finish there however, as we also saw a White-lipped pit viper basking in the shade of a tree on the way out.